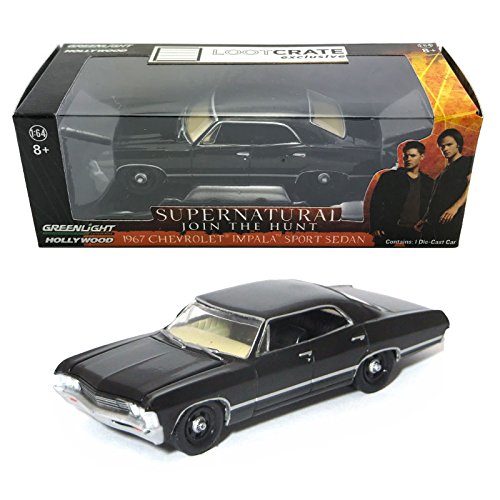 The classic black 1967 Chevy Impala is essentially the third home on wheels to both brothers when needed, its trunk is stocked full of every weapon and item needed to fight against any supernatural entity on the planet. It was purchased by John Winchester and handed down to his eldest son Dean, who treasures the car. Despite near destruction, countless scrapes and bruises, and several months in storage, the Impala – like Dean and Sam themselves – never stays down for long. History: The Impala was built in in Janesville, Wisconsin, on April 24, 1967, her first owner was Sal Moriarty, who bought her for $3,999. John Winchester bought her in 1973. The price on the windshield was$2,204. This Loot Crate exclusive is a re-creation of the Impala as she existed when Dean convinced John to buy her in 1973, complete with the period correct Kansas license plate on the back.★ THE PERFECT GIFT FOR THE SUPERNATURAL FAN
Dean’s 1967 Supernatural Chevrolet Impala Sport sedan join the hunt by Greenlight
★ Special Lootcrate exclusive Edition, not a normal retail release
Die-cast 8cm long model car. 1/64 Hot Wheels scale
★ Opening Bonnet